When you begin planning events, you may run into certain terms you do not recognize. To avoid confusion, here are a few key terms you may hear along with their definitions.

RFP:  This is an often used acronym for “Request for Proposal.” A formal request detailing items and services needed by a client seeking bids from event service providers. A carefully detailed written RFP is the best way to communicate your needs to different suppliers in search of the best fit.

Example: “We just received an RFP for a Candy land Themed Party; they are looking for several bars equipped with bar backs and stools as well as themed perimeter décor and strolling entertainment.”

DMC: This acronym stands for “Destination Management Company.”  A management service with extensive local knowledge, expertise, and resources specializing in the design and implementation of events, activities, tours, transportation and program logistics.

Example: “Art of the Event is the largest DMC with in-house décor in New England!”

Strike:
The process of breaking down and taking away an event setup.  Tear down and tear away are also commonly used in both the film and event industries.

Example: “There was so much décor to be taken down that the strike took 8 hours!”

Front of House: Those who work in an office setting in direct contact with clients throughout the planning process. These staff members handle all of the formal clientele work.

Example: “Gayle holds meetings with her Front of House team weekly to assure that all clientele work is running smoothly.”

Back of House:  The back of house is where products and services happen.  In venues, it refers to kitchen and event equipment as well as the people who work on your event.   In a production or design house, the back of house refers to equipment and crew.  Crew people are the event personnel who deliver, assemble and break down equipment, lighting and decor. Back of the house individuals handle all of the behind the scenes work that goes into the execution of an event.

Example: “Art of the Event’s back of house crew personnel are capable of setting up props, lighting, stages and furniture for events.”

Rigging Crew: Those in charge of the system of ropes, cables or chains put in place in order to hang production equipment or decor items.

Example:  “The weight of the event’s ceiling treatment required extensive planning and coordination from the rigging crew to make sure it would not detach from the ceiling.”

Truss: Metal grid usually suspended above the stage or audience that is used to hang lights, sound, or other equipment.

Example: “The truss used at the client’s Bar Mitzvah held nearly 50 lights, which made for a spectacular show on the dance floor.”

Run-Through:  A meeting term meaning a practice run of the show.  A run through can be a fully realized or abbreviated rehearsal.  Similar to a dress rehearsal in theatre.

Example: “The event coordinator conducted one last run-through with her client to ensure all the music, lighting, décor and props were to the client’s liking.”

Focus:  A lighting term referring to the time prior to an event production where the equipment is hung, tested and set for the show.

Example: “Everything was situated perfectly on the truss, so the back of house crew proceeded to the focus to make sure all the equipment was working in-sync.”

Calling The Show:
A technical director relays cues to technical professionals behind the scenes of a meeting production.  The director tells videographers, switchers, lighting and sound professionals exactly when and how to do their work so a show proceeds as planned and on schedule.  The TD calls the show.

Example: “The awards ceremony proceeded as planned and flawlessly all thanks to the keen eye of the technical director who was calling the show in a timely manner.” 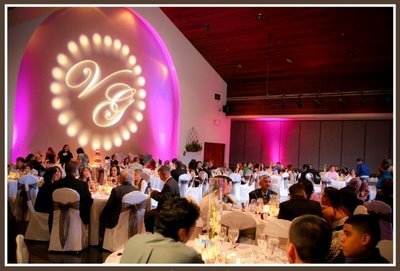 Gobo: A plate or screen that is placed in front of a spotlight in order to project an image.

Example: “The company opted for a gobo to reveal their newly minted logo during the company’s annual event.”

Pre-Con:  A pre-convention meeting: A meeting held with event vendors, sponsors and suppliers on site prior to the scheduled event date.

Example: “We have a pre-con meeting on Thursday with the venue and other vendors to discuss each team’s load-in time.”

Debrief: Following up with a client or supplier after an event in order to gather valuable feedback regarding how the event was received, what worked well, and what could be improved upon.

Example: “Art of the Event makes it a point to always debrief our clients after an event in order to gauge what you thought about the whole experience!”

Event Resume: A compilation authorized by both the planner and their client consisting of all event details including all vendors, program timelines, and pertinent contact information.

Example: “I will be reviewing the event resume tomorrow to make sure everything I need at my event is accounted for.”

Confidence Monitor: A downstage video monitor that most often doubles what’s on the main projection screens.  It is for the convenience of the speaker on stage, and it gives the speaker the “confidence” to not have to awkwardly turn and look at the main projection screens. Instead, they can just glance down and know their presentation is properly synched.  Depending on the size of the stage there can be more than one.

Example: “The keynote speaker at the university’s graduation ceremony had a confidence monitor while addressing the students, faculty and staff.”

Green Room: A room or area for the cast, speakers, or performers to prepare or wait for their time on stage.

Example: “The band was waiting in the green room while the openers performed on stage for the first two hours of the event.”

Keynote: A speaker at an event that is the main draw or is top billed. That speaker’s actual speech or time slot.

Example: “The company’s annual employee appreciation event is to feature a keynote speech from the president.” 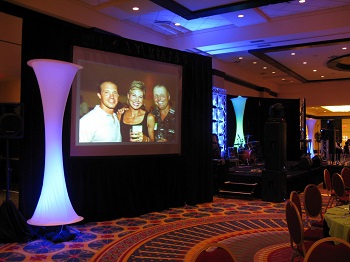 Rear Projection: When video or slides are projected from behind the screen in which case the projector(s) are usually backstage out of view of the audience (and the image is electronically reversed).

Example: “Art of the Event recommended that their client use rear projection for their stage set so the equipment was not visible to the crowd.”